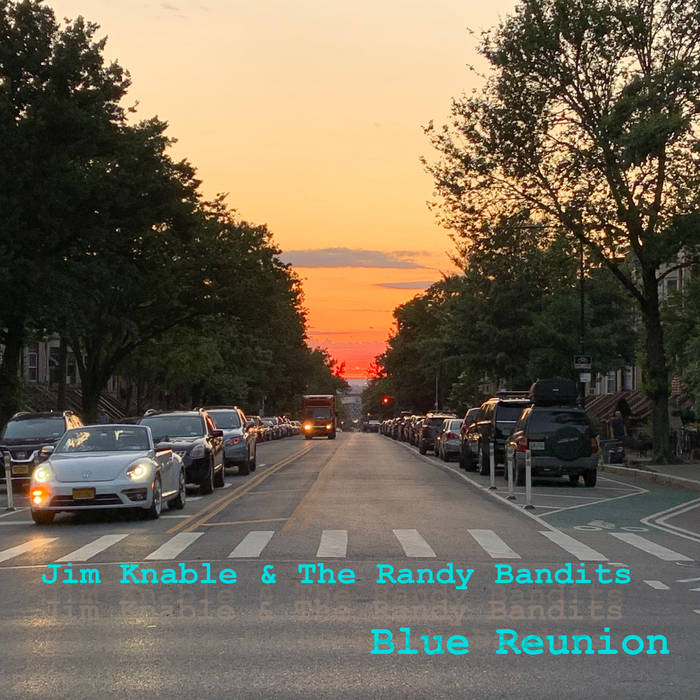 Jim Knable & The Randy Bandits rocked, rolled, and cajoled New York City and the Eastern Seaboard from 2003's The Woman or the Blues to 2009's Golden Arrow album (the follow-up to their debut album opus Redbeard in 2006). Since 2009, the core Bandits fanned out to do everything from writing Broadway shows to raising kids in New Jersey, sometimes both simultaneously. Jim Knable kept getting the group and variations of the group together as well as doing his own independent projects (including being the Jewbadour for the Unorthodox Podcast and, over the last two months, writing and releasing SONGS OF SUFFRAGE for Luna Stage and the Andrew Goodman Foundation through National Endowment for the Arts and NJ Stages grants).

The Randy Bandits didn't get back into the studio for another proper album until the beginning of 2020. Pretty lucky they did that by February! Blue Reunion, then, is a concise story of everything the band has been through from 2010-2019 or so, starting exactly where Golden Arrow left off--in full Outlaw Country Rock mode-- and ending with the stripped down folk reckoning that says exactly where Jim Knable and his band are at these days. (A hint: the last two songs are called "Everything Is Not All Right" and "Mourning Dove.)

"Blue Reunion finds the band in full-on outlaw country mode, peppered with a smattering of gospel, swagger, swing and honky-tonk piano. Knable looks with a birdview's perspective at the happenings in the last decade, zooming in on details with uncanny precision. The band has deepened their sound and it really comes together in the slower passages. The years have been kind to the Bandits. Creating timeless music was always their goal and with Blue Reunion they pass with flying colours."
Hans Werksman, Here Comes the Flood, The Netherlands

"Jim Knable & The Randy Bandits boast a sound that lives up to the irreverent attitude inherent in the band's handle. Their new effort, Blue Reunion, the group's first in 12 years following a series of side projects that trailed their last effort, Golden Arrow, in 2009, finds the group as assured as ever, thanks to an easy approach and the unassuming attitude that defines their approach to Americana. Knable himself comes across as an affable singer, producer and front man, and while certain songs -- "Judas Tree" in particular -- take a more somber tone, the album's overall tone is ebullient, engaging and as winsome and rollicking as always. "Everything Is Not All Right" offers words of warning via a folky singalong style, but as its lyrics insist, "It's only rock and roll," a reminder often needed to set folks at ease. On the other hand, the melancholy mood of "Mourning Dove," the final song of the set, shares that sense of loneliness and isolation that's gripped the world over the past ten months, while also offering an optimistic view that this too shall pass. Although it was recorded just prior to the pandemic and rushed for release after it took hold, Blue Reunion makes a prescient statement of sorts that sums up today's state of uncertainty while also offering hope for a happier tomorrow."
Lee Zimmerman, Goldmine Magazine

"The nine songs Blue Reunion from Jim Knable start off with "(I'm Not A) Bad Guy," which sets the tone of good-time rockin'. Picture Jim Croce going deep into the underground creating fun where it may not exist. "Don't Get Lost" has a warm production for the moody introspection. Knable talk/sings his poetry throughout each episode. The songs roll off like vignettes inside a film. "Lifetime Ago" skips along, quickly changing the pace and vibrations. "Never Any Right Age" takes Bruce Springsteen's "Hungry Heart" sentiment down a few notches, song tempos going - in slow motion - up and down up and down, kinda like performing on a boat - each rise and fall another view or aspect to see the songwriter's approach. The fuzztone on the guitar re-exercising guitarist Tony Peluso of The Carpenter's fusion of hard rock into their middle-of-the-road sweeping adult bubble gum. "Everything Is Not All Right" sounds like a hootenanny re-working of the traditional gospel song "This Little Light of Mine (Let it Shine, Let it Shine,) and with its energy the composition is a fun and spirited ride with references to Jesus, Moses and Haley's comet... "Morning Dove" concludes the album with elegant production finding elements of Lou Reed, Bobby "Sunny" Hebb and Harry Chapin...with a dash of Dylan, of course."
Joe Viglione, Medford News Weekly, Massachusetts

"The more I dive into Blue Reunion, the more it seems to fall into the category of personal picks for "Non-Christmas music for that time of year." When the sky is grey, and people hunker down, people like me slow down and look for solace in tunes. The extra dash of melancholy in 2020 has me looking for tunes that both reflect my lament and bring me calm, and Blue Reunion seems to be hitting that spot for me. "Lifetime Ago," the third track, climaxes with Knable's voice hitting a wavering peak. I can't help but feel that's how a lot of us will look at the end of 2020--a wavering peak in the year. That quasi-reverent feeling is something that comes up almost involuntarily for me at times--especially when organ is involved (thanks, "Citadel" for your contribution to that). More overt references to spirituality can be found in the rather bleak "Judas Tree," which is honest and dark enough to make me feel a bit awkward for pointing out the reverent feelings a few sentences ago. Apparently Knable doesn't want me to feel too awkward though, because he continues his spiritual rant in "Everything Is Not Alright" under rather peppy packaging. Blue Reunion is one of those albums where each time you listen a line will jump out at you in a different way... I appreciate the depth and feeling here."
Ryan Getz, TunedUp, Ohio

"Good stuff with great honky-tonk piano player & deep voice mix & swing country sound. Jim Knable & the Randy Bandits get savoir-faire ahead with "Never Any Right Age", " Bad Guy ", " Everything Is Not All Right'' among other tracks ..... A must!"
Patryck Albert, Radio 103.1, France

"Jim Knable & The Randy Bandits have created Blue Reunion, a new LP that takes you back to the days of sunny day drinking sessions, stripped-down campfire sing-alongs and last call blues. The songs on Blue Reunion are soulful, stripped-down and nimble... Whether playing piano-driven honkey tonk, psychedelic blues, or accordion-backed shanties, this band isn't short of range or surprises. If you like James Taylor, Cat Stevens, or The Zombies, give Jim Knable & The Randy Bandits a listen. Their music is familiar, but new; mellow, but lively."
Dan Kadison, NewsWhistle, Connecticut


The Randy Bandits for this album were:

"Won't Drag Me Down" was made possible by the generosity of Billie Gastic and Blanca Young.

The Angel who turned this album from dream to reality insists on anonymity, but I can say that he walks between rain drops in his alligator shoes.