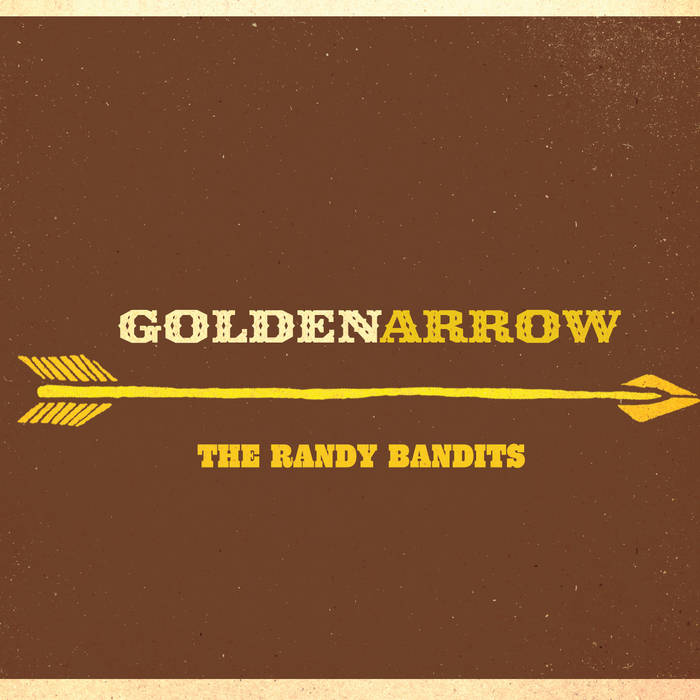 "Bouncy and brave, Golden Arrow finds the Bandits in all their awesome glory.

With songs written by vocalist/guitarist/saxophonist Jim Knable and arranged by the rest of the crew, this is a record that is boundlessly fun to listen to and impossible not to clap along with. The arrangements are a stew of genres, cooking up mouth-watering folk along with blues, gospel, funk, Americana, musical theatre, and country. Every now and then there’s even a dash of jazz for good measure.

In approaching Golden Arrow, The Randy Bandits decided to create a sort of “live” vibe and called upon engineer and mixer Bryce Goggin to help them create something unique. The whole record was recorded over the course of Memorial Day weekend in Brooklyn and used live recordings with the whole band present (for the most part) instead of the typical layering of performance tracks.

As a result, the record sounds and feels as natural as an enchanting gust through a small town.

Amusingly, “Modern Man,” the album’s first track, sounds like the music of a feisty gospel revival just after an elderly lady has experienced “healing” from a toothless preacher. Hand-claps, piano, and guitar accompany the vocals in full Hallelujah mode.

Other tracks dig deep with soul and blues influences, like the old-fashioned “Loraine.” Vocalist Jay Buchanan pours his guts out over a horn section, trickling guitar, and Russ Kaplan’s keys. “The world is made of gold,” Buchanan tells us urgently. Listen to his shade on the notes, too, as he walks the line between tacky and affecting with courage.

“Romeo” is funky and the background vocals swell to create a spiritual experience. And “5 Women Masked” sounds like perfect music for a Wild West train robbery.

Golden Arrow is a terrifically enjoyable record. The Randy Bandits have created something special here and have explored various genres with marvelous triumph. This is cool, spirited music that never pulls punches, never backs down, and never ceases to thrill."

"The Randy Bandits from Brooklyn are the kind of band who will make you want to buy friends lots of beer, toasting the health of the musicians. Brass, harp and honky tonk piano come tumbling out of your speakers. Frontman Jim Knable writes catchy melodic tunes straight out The Band legacy, a hard act to follow, but he pulls it off. The new full length Golden Arrow is a bull's eye shot that deserves a prominent place on the shelf marked Americana extraordinaire. The Randy Bandits have honed their sound with care and developed themselves into one of today's best sounding "bar" bands who should be playing theaters and mid-sized venues real soon."

And Jason O. Sinard of Plug In Music:

"The soul is there. And the piano, horn section, and other percussion, used heavily on the album, invoke more of a jazz feel that might be compared to a Steely Dan recording. There is a gospel feel to some of the tracks, but instead of a religious feel, these are tunes that you'd expect to hear on the jukebox at your favorite watering hole while taking care of your fifth can of PBR. There are upbeat moments to tap your feet to, and then the melancholy ones that you'd misrecollect, in case you really are putting away a 6er of that beer.

"Golden Arrow" is a soulful, jazzy, pseudo country rock record that I'd say you can find some common ground with if you like one or all of the aforementioned genres. Give it a shot, and have a few when you check it out."

With their second album Golden Arrow, The Randy Bandits take a giant step forward in honing their recorded sound, while capturing the spirit of their live performance. The entire album was recorded over Memorial Day Weekend 2008 at Trout Recording in Brooklyn, engineered and mixed by recording guru Bryce Goggin (Phish, Pavement, Sean Lennon, among others). Almost all of the album was recorded entirely live, with only a few backing vocals added later. Making this possible were talented guest musicians Jon Mossberg (alto sax), Kenny Warren (trumpet), Deidre Rodman Struck (of the Lascivious Biddies on backing piano) and Richard X. Heyman (home-recording music icon and founding member of The Doughboys on percussion). Listening to Golden Arrow is essentially listening to an amazingly well recorded Randy Bandits gig, with a few bells and whistles thrown in to make these the definitive recordings of these songs.

The Randy Bandits first formed in New York in 2002 when Californian songwriter/playright Jim Knable (SPAIN at MCC) and Maryland piano-player/director Russ Kaplan (New Sounds Theatre) started meeting informally to play Jim's songs together with two of Jim's closest singer friends from college, Stephen Aleman and Regina Bain. The Randy Bandits started casually playing at folk clubs and friends' parties in New York City, emphasizing their vocal harmonies and arrangements. By 2004, The Randy Bandits were undeniably a real band that would grow over the next four years to include multi-instrumentalist Kentuckian Spiff Wiegand (playing everything from accordion to banjo to trumpet), Jersey-bred guitarist Chris Murphy (a middle school choir teacher by day), jazz-trained bassist Jay Buchanan (Chris' childhood friend) and on drums, Jim's younger brother Sunny Knable (a classically trained composer and pianist). In 2006, with guidance from producers Nancy and Richard X. Heyman, the group released the full-length album Redbeard, referred to by legendary music critic Lee Zimmerman as "boast[ing] the type of sound that represented what pop music used to be about-- strong singing, terrific harmonies and melodies that don't pay particular allegiance to one genre or another but embrace them all... delivering a good tune and making an earnest impression", and garnering comparisons to Moxy Fruvous, The Band and Neil Young.

By 2007, Regina and Stephen had left as full-time Bandits, leaving a tight six-piece group to forge ahead towards a decidedly Freewheeling Roots Rock sound. The Randy Bandits have played and continue to play at The Knitting Factory, The Living Room and Rockwood Music Hall in NYC, as well as at festivals such as New Haven's International Festival of Arts and Ideas. The band remains dedicated to the same spirit that first brought it together, making good genre-blind music for each other and for nice people who need it.


The Randy Bandits for this album were: